The Lost Pleasures of Eldorado

The historic commission of our wee little burg of Weehawken has digitized items in their collections and put them online. (Weehawken’s fame claim is being the site of the Burr-Hamilton duel, but there is a lot more to this hamlet than that.)

So I’ve used a little bit of my quarantine time ration to read about Eldorado—not the fabled city of gold but a 25-acre pleasure park built by the Palisades Amusement and Exhibition Company in 1891, which included a casino, a castle built in the Rhenish style that offered food and drink and views of the Hudson River and New York City skyline (such as it was then) and a fantastical fountain populated with nymphs and satyrs that glowed under electric lights at night. Bolossy Kiralfy, one of the Kiralfy brothers, the other being Imre, was named as General Manager/Amusement Director.

(Side note: The Kiralfy Brothers were well known burlesque and spectacle producers in Europe and the United States toward the end of the 19th century. Reading through the accomplishments on their Wikipedia page, it’s clear these guys deserve some spectacular theater about themselves. Note for a future project.)

At the heart of Eldorado squatted a gigantic Roman-style amphitheater that seated 8,000 people and staged such operatic delights as “King Solomon Mines” (an 1891 Kiralfy production) and “Egypt Through Centuries” (courtesy of Augusto Francioli, an Italian ballet master) with thousands of actors and a zooful of animals. (More on this in a moment.)

The amphitheater even got its own article in the October 31, 1891, issue of Scientific American, which laid out in engineering-speak the ponderous dimensions of the place, which measured 445 feet in length and 350 feet in width and housed a “grand stand”—their spelling—where the audience perched itself and two playing areas: a ground-level arena and a stage five feet above that 140 feet wide and 330 feet long. The grand stand was punctuated by dozens of archways that led to internal entrances and exits and fronted by a broad staircase rising up 30 feet (like the steps of the Doges Palace in Venice) to bring the spectacle-goers into the magic world of the theater. 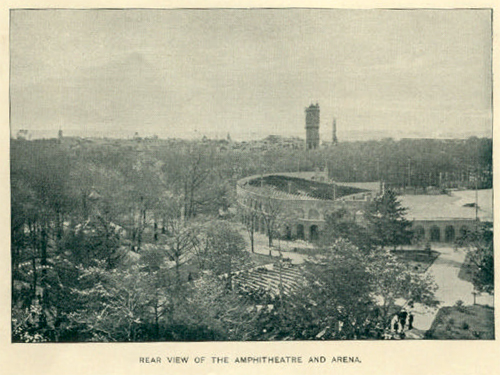 But how, you might ask, if you have some basic geological knowledge of the area, did the audience members ascend the steep palisades on top of which Weehawken perches to get to this wondrous place? That took another amazing invention: a 197-foot tall elevated railway that brought the New York passengers coming in by ferry to the top of the palisade, and from there they could go by train to Eldorado or, if they wanted more adventure, to the race track in Guttenberg, several miles north of Weehawken.

John H. Bonn, president of the North Hudson Country Railway Association, was the mastermind behind this. His goal was not to bring people to Eldorado but to solve a transportation problem caused by people wanting to get from North Hudson to 42nd Street in New York City as quickly and efficiently as possible. The only ways to get to the ferry terminal were steep roads crowded by the traffic coming to and from the trainyards and piers along the Hudson River. Weehawken was an important terminus for commerce moving from New York City to north New Jersey as well as western New York State, so the area along the river was really clogged, and getting to and from the area caused a lot of headaches for people. (Yes, traffic jams in 1891.)

He reportedly spent $750,000 on this project (a 2020 equivalent of over $21 million). As a retrospective article in 1926 put it, “its cost was staggering to the people of those days, when a workman made less per day than he now earns in an hour. But, Mr. Bonn did not hesitate, and the traffic which his road attracted proved that his vision was more than idle dreaming.”

The train would travel hundreds of feet above the land below along a cut in the palisade to reduce the grade until it reached the grounds of Eldorado. From there it traveled to “a magnificent station on Park avenue,” where the tracks turned north for West New York and Guttenberg.

When it opened in 1891, crowds crossed from New York City by ferry to visit the wonders of Eldorado. Yes, there was the casino and the fountain and the delights of the promenade. But the shows, the wonder of wonders, the magnificence of the magnificent—the draw that drew and drew, where 50 cents (75 cents if you wanted to splurge) would get you a seat—no, a place in history—to watch “Egypt Through Centuries,” the show of the 1892 season.

(Bolossy Karalfy did the inaugural show in 1891, “King Solomon’s Mines,” but a dispute between him and the other members of the organization led to the Francioli taking over the production in 1892.) 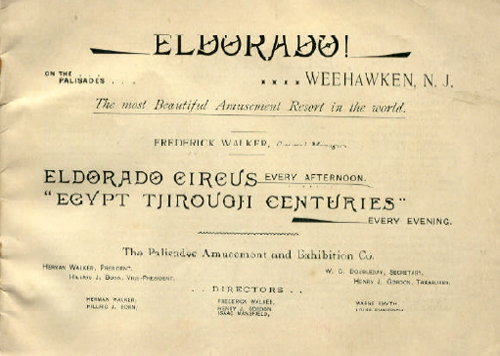 A five-act extravaganza covering 110 centuries of Egyptian history, the highlights of the show included the sacrifice of 100 virgins to Osiris, the great pyramids and the pilgrimage to Mecca, the birth of Moses, Cleopatra and her court, the Suez Canal and the fall of Alexandria. On the stage and in the arena were fire eaters, jugglers, camels, donkeys, an army on horseback, cannons and fireworks.

The sacrifice of the virgins, according to the program, was called the Ballet of the Virgins (choreography was Francioli’s passion). In Weehawken, a history about the town, the image of this ballet from the program has this description: “The ballet involved the sacrifice to Osiris of hundreds of virgins who, dancing their way into the Nile River to their deaths, caused the riverbanks to overflow and sustain the crops.” 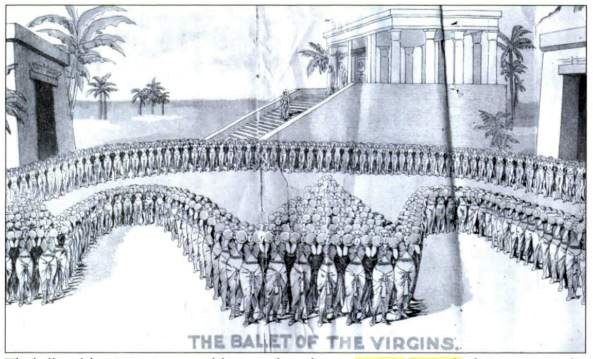 The finale was “The Bombardment of Alexandria,” where entrenched Arabs fight it out with English soldiers and sailors, underscored by drums, blaring trumpets, cannon and musket fire, camels hither and thither, and cavalrymen galloping about, until “the fanatical Arabs” take to their heels amid the smoke and fire which cover the city. “The spectacle ends with the Viceroy of Egypt and Admiral Seymour standing triumphant amid Alexandria's smoking ruins, while the rebel Chief Arabi-Pasha kneels in chains before them with his fanatical followers dead about him. Such was the entertainment offered in the open air on the heights of Weehawken!”

But by 1894, it was all gone. Transportation modes changed (an electric trolley could now make it up and down the steep roads with ease), ticket sales languished, the racetrack foundered—and that was that. The casino was still used after 1894 for boxing matches and vaudeville acts, and Karl Bitter, the sculptor, took over the Rhenish castle as a studio, but in 1898, a fire engulfed everything left over.

The 25 acres of the amusement park were sold off as house lots on “Eldorado Heights,” as the business prospectus called it; the highway now called Boulevard East was being built out, and the cars took over. 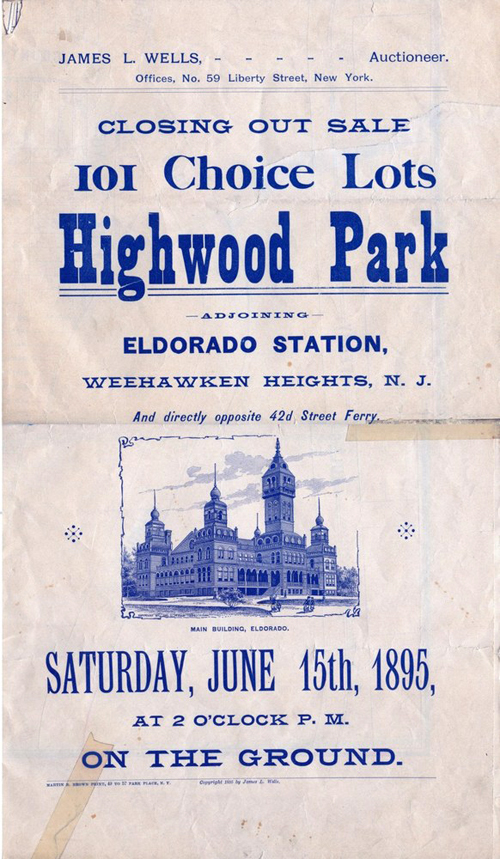 In 1902, a Philadelphia concern bought the railway trestle for $2,300 (roughly $60,000 today) and tore it down. And Eldorado vanished, remembered only by a plaque where the base of the trestle stood and Eldorado Place, a tree-lined street of lovely old houses.

It must have been a heady three years, though, with historical centuries careening around the stage, an airborne train ride to an elevator that brought you from the heights to the Hudson’s breadth, then the return on the undulating Hudson River to the city the prospectus called “the metropolis of the new world.”

When I go on my daily walks, which take me around the perimeter of Eldorado’s footprint, I look for the escaping camel or the virgin trying to sneak away from the death dance, or cast an ear for the plash of the fountain’s water gleaming under electric lights and the murmur of hundreds of people promenading under a dulcet evening sky.

Then COVID goes away for a while, and that is a very good thing.

Download a PDF of the individual essay or become the proud owner of the collected works at Michael’s Bookstore.